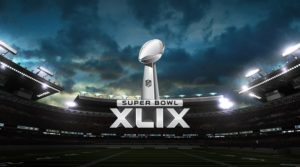 “Super Bowl XLIX is an upcoming American football game between the American Football Conference (AFC) champion New England Patriots and National Football Conference (NFC) champion Seattle Seahawks to decide the National Football League (NFL) champion for the 2014 season. It will be the 49th edition of the Super Bowl and the 45th since the 1970 AFL–NFL merger. The game is scheduled to be played on February 1, 2015, at University of Phoenix Stadium in Glendale, Arizona.[8][9] Kickoff is scheduled for 4:30pm MST (6:30pm EST/23:30 UTC).[10] This will be the second Super Bowl played in that stadium (XLII), and the third one held in the Phoenix metropolitan area (XXX at Sun Devil Stadium in Tempe). The game will be broadcast in the United States by NBC.[11]”