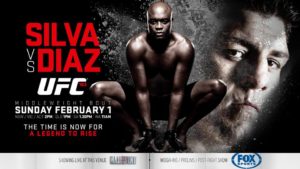 Head in and watch it live on the BIG screen in the 2014 AHA Sports Bar of the Year.

“The event is expected to be headlined by a middleweight bout between Anderson Silva and Nick Diaz.[1]

A flyweight bout between Ian McCall and John Lineker was originally booked for UFC Fight Night: Shogun vs. St. Preux. However, the bout was canceled on the day of the event as McCall was stricken with a blood infection. The fight was later rescheduled for this event.[2]

A middleweight bout between Ed Herman and Derek Brunson was originally booked for UFC on Fox: dos Santos vs. Miocic. However, the bout was cancelled on the day of the event as Brunson was stricken with a stomach ailment. The fight was later rescheduled for this event.”