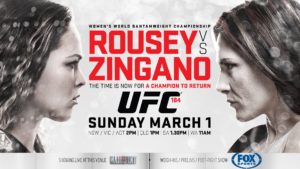 “A UFC Middleweight Championship bout between Chris Weidman and Vitor Belfort was expected to serve as the event headliner. The much delayed pairing was previously scheduled to take place at UFC 173 and also at UFC 181. However, on January 30, the UFC announced that Weidman had pulled out of the bout, citing an injury he sustained in training.[2] Subsequently, a UFC Women’s Bantamweight Championship bout between current champion Ronda Rousey and top contender Cat Zingano was promoted to the main event.[1] Belfort was offered an interim title fight first against Lyoto Machida and then Gegard Mousasi as a replacement for Weidman, but he declined and stated that he would only fight for the full title.[3][4][5]

Neil Magny was briefly linked to a bout with Josh Koscheck at the event.[6] However, Magny was pulled from the fight in favor of a bout with Kiichi Kunimoto at UFC Fight Night 60. Koscheck is now expected to face Jake Ellenberger.[7]

Mark Muñoz was very briefly scheduled to a bout with Caio Magalhães at the event.[8] However, shortly after the bout was announced by the UFC, Magalhães indicated that he would not be able to compete at the event due to a lingering infection after recent dental surgery, which would require additional surgery.[9] Muñoz is expected to stay on the card against returning UFC veteran Roan Carneiro.[10]

A bout between Holly Holm and Raquel Pennington, originally booked for UFC 181 and ultimately scrapped due to Holm being injured, has been targeted for this event.[11]

A heavyweight bout between Frank Mir and Antonio Silva, originally scheduled for the main card, was moved up a week and is expected to serve as event headliner for UFC Fight Night 61.[12]

Ronaldo Souza was expected to face Yoel Romero at this event. However on January 15, Souza was forced to withdraw from the bout with pneumonia. The pairing is expected to be left intact and moved to a later date.[13]

Yancy Medeiros was slated to face Tony Ferguson at this event, but an injured foot forced him out of the bout. On the same day, Gleison Tibau was announced as his replacement.[14]”