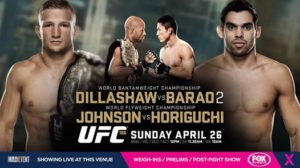 Head in and watch it live on the BIG screen in the 2012 AHA Sports Bar of the year.

“The event will be the seventh event that the UFC has hosted in Montreal, Quebec.[1]

The event is expected to be headlined by a UFC Bantamweight Championship rematch between current champion T.J. Dillashaw and former champion Renan Barão. Their first fight at UFC 173 ended in a TKO victory for Dillashaw.[2]

A welterweight bout between Rory MacDonald and Hector Lombard was expected to take place at the event. However, on February 10, the UFC announced the removal of both participants from the card and indicated that the pairing had been scrapped.[3] It was later revealed that the fight was cancelled due to Lombard’s failed drug test from UFC 182.[4] Subsequently, it was announced that MacDonald would receive a title shot against current champion Robbie Lawler at UFC 189.[5]

We never spam and you can opt-out at any time with one click
WestWaters Community Grant
Sunday 26th April: Health, Home and You Expo