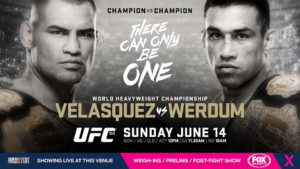 Head in and watch it live on the BIG screen!

“The event is expected to be headlined by a UFC Heavyweight Championship unification bout between current champion Cain Velasquez and interim champion Fabrício Werdum. The bout was originally expected to take place at UFC 180. However, Velasquez pulled out of the bout due to a knee injury and the event was instead headlined by an interim title bout between Werdum and Mark Hunt.”

We never spam and you can opt-out at any time with one click
150 Lashes Schooners Just $7 in the Sports Bar
UFC 189: Mendes vs. McGregor