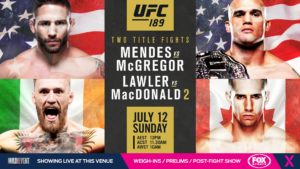 Head in and watch it live on the BIG screen!

The event will take place during the UFC’s annual International Fight Week.

Due to an injury sustained during training Featherweight Champion Jose Aldo has been forced to withdraw from his much-anticipated clash with Irish sensation Conor McGregor. Rather than postpone the fight the UFC have replaced Aldo with top contender Chad Mendes who will fight McGregor for the interim Featherweight Title!

The co-main event is expected to feature a UFC Welterweight Championship bout between current champion Robbie Lawler and top contender Rory MacDonald. Their first fight at UFC 167 ended in a split decision victory for Lawler.

Matt Brown was briefly linked to a bout with Nate Diaz at the event. However in mid-April, Brown announced that the pairing had been scrapped. Brown is expected to remain on the card against Tim Means.

A welterweight bout between Jake Ellenberger and Stephen Thompson was expected to take place at this event. However on May 15, the bout was moved to a main event status at The Ultimate Fighter 21 Finale, taking place a day later at the same venue.

John Hathaway was expected to face Gunnar Nelson at the event. However, on June 23, Hathaway pulled out of the bout due to an injury. This prompted a shift in another welterweight bout on the card as Brandon Thatch was pulled from his fight against John Howard to face Nelson, while Cathal Pendred was announced as Howard’s new opponent. Pendred had previously fought only 28 days before the event, when he defeated Augusto Montaño at UFC 188.

The Management and Staff of The Phoenix Hotel promote the responsible service of alcohol & gaming. Any form of advertising and promotions contained (but not limited to) online and print media are not implicitly or explicitly directed at minors, excluded persons or vulnerable or disadvantaged groups.

We never spam and you can opt-out at any time with one click
UFC 188: Velasquez vs. Werdum
Father’s Day 2015: Sunday 6th September