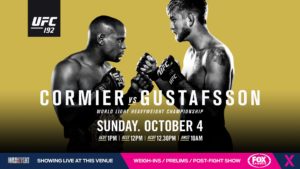 Head in and watch it live on the BIG screen in the 2012 AHA Sports Bar of the year!

The event will be the fourth time that the promotion has hosted in Houston, and the first since UFC 166 in 2013.

The event is expected to be headlined by a UFC Light Heavyweight Championship bout between current champion Daniel Cormier and top contender Alexander Gustafsson. The bout was initially linked as the event headliner for UFC 191. However, the bout was postponed to this event as a result of Cormier’s knee injury.
Leslie Smith was expected to face Raquel Pennington at this event. However, Smith was forced to pull out of the event due to injury and Pennington was rebooked against a separate opponent at another event.
Anthony Hamilton was expected to face Derrick Lewis at the event. However, Hamilton was pulled from the bout and replaced by Viktor Pešta.

We never spam and you can opt-out at any time with one click
Sunday Oct 18th: Make Me Beautiful Expo
Oaks Day Luncheon 2015