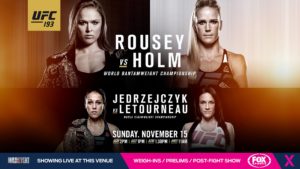 Head into the 2012 AHA Sports Bar of the year to watch it live on 2 BIG screens!

The event will be the first that the promotion has held in Melbourne. It will also be the third stadium venue to host a UFC event after UFC 129 and UFC on Fox: Gustafsson vs. Johnson, which took place at the Rogers Centre in Canada and Tele2 Arena in Sweden, respectively.

The event was expected to be headlined by a UFC Welterweight Championship bout between current champion Robbie Lawler and Carlos Condit, a former WEC Welterweight champion and former interim UFC Welterweight champion. However, the bout was scrapped from the event after Lawler suffered a thumb injury. The pairing is expected to remain intact and be rescheduled at a future event. Subsequently, a UFC Bantamweight Championship bout between undefeated champion Ronda Rousey and top contender Holly Holm, originally scheduled for UFC 195, was announced as the new headliner for this event.

Co-featured at the event will be a UFC Strawweight Championship bout between current champion Joanna Jędrzejczyk and Valérie Létourneau.

Brazilian fighters, William Macario and Ricardo Abreu were expected to face Brendan O’Reilly and Daniel Kelly respectively at the event. However, both fighters pulled out of their bouts in late September citing injury and were replaced by James Moontasri and Steve Montgomery.

Michael Bisping was expected to face Robert Whittaker at the event. However, Bisping pulled out of the bout on September 30 citing an elbow injury and was replaced by Uriah Hall.