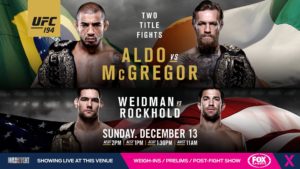 Head in and watch the most anticipated UFC fight for 2015 live on 2 BIG screens in the 2012 Vic AHA Sports Bar of the year.

“The event was originally scheduled to take place on December 5. However, the MGM Grand Garden Arena had already been booked for an Andrea Bocelli concert, prompting the UFC to look at alternative venues such as the Mandalay Bay Events Center. The AT&T Stadium in Arlington, Texas was the most relevant venue under consideration, which would likely have made the event the highest attended in the promotion’s history. Subsequently, on August 10, UFC president Dana White confirmed the event would take place at the MGM Grand Garden Arena, albeit one week later on December 12.

This event marks the first time the UFC has ever scheduled three events in consecutive days, with all of them taking place in Las Vegas. Instead of the MGM Grand Garden Arena, the other two events will be held at The Chelsea at The Cosmopolitan.

The event is expected to be headlined by a UFC Featherweight Championship unification bout between current champion José Aldo and interim champion Conor McGregor. The bout was originally expected to take place at UFC 189. However, Aldo pulled out of the bout due to a rib injury and the event was instead headlined by an interim title bout between McGregor and Chad Mendes.

A middleweight bout between Ronaldo Souza and Yoel Romero was originally booked for UFC 184 and later UFC on Fox: Machida vs. Rockhold. However, the bout was cancelled both times due to Souza being struck with pneumonia and Romero pulling out due to a ligament and meniscus tear in his knee, respectively. The fight was later rescheduled for this event.”