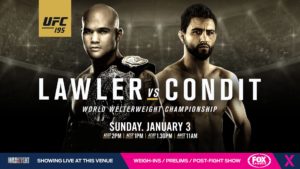 “The event was expected to feature a UFC Women’s Bantamweight Championship bout between undefeated champion Ronda Rousey and Holly Holm, a former 18-time boxing world champion in three weight classes. However, the bout was moved to UFC 193 after a thumb injury to UFC Welterweight champion Robbie Lawler forced him out of his title bout against Carlos Condit. The Lawler/Condit pairing will remain intact and has been rescheduled to headline this event.

A welterweight bout between Sheldon Westcott and Edgar Garcia, originally scheduled for UFC Fight Night: Namajunas vs. VanZant was moved to this event.

A lightweight bout between Dustin Poirier and Joseph Duffy was originally booked as main event for UFC Fight Night: Holohan vs. Smolka. However, the bout was canceled on fight week due to Duffy sustaining a concussion during a sparring session. The fight was later rescheduled for this event.

Neil Magny was briefly scheduled to face Stephen Thompson at the event. However on November 3, Magny was pulled from the pairing in favor of a matchup with Kelvin Gastelum at The Ultimate Fighter Latin America 2 Finale. Thompson was expected to remain on the card, but on December 13 it was announced that he was going to face former UFC Welterweight champion Johny Hendricks at UFC 196.

Russell Doane was briefly scheduled to face Michinori Tanaka at the event. However, Doane was pulled from the pairing for undisclosed reasons and replaced by former Bellator Featherweight champion and one-time UFC Bantamweight Championship challenger Joe Soto.

Erik Koch was expected to face Drew Dober at this event. However on December 4, Koch was forced to pull out of the event due to injury and was replaced by Scott Holtzman.

Kelvin Gastelum was expected to face Kyle Noke at this event. However on December 22, Gastelum was forced to pull out due to a wrist injury and was replaced by promotional newcomer Alex Morono.”