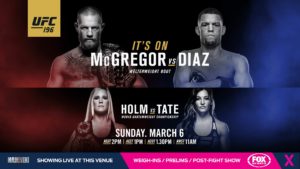 Head in and watch it live on 2 BIG screens.

“We’ve got a new UFC 196 featured bout and it’s a goodun’! Nate Diaz steps in for the injured Rafael dos Anjos against Conor McGregor.

The fight is taking place at welterweight and while no title is on the line, lots of money and pride will be at stake. The card and superfight isn’t happening until March 5 (March 6 AEDT), but we’re so excited that we decided to take an early look at the matchup.

Conor McGregor has shown some solid grappling of late. As the fight went longer, McGregor made it harder for Chad Mendes to get him down and punished the wrestler on his way in.

The angles and stance switches he uses on his feet can make it a little harder to get a bead on his legs for shots, though Diaz doesn’t shoot in for double and single-leg takedowns often, if ever. Off of his back, McGregor is basic, but durable.

And he has confidence in his basics. For example, he took a beating from Mendes off of his back, but never got flustered and eventually created enough space from his half-butterfly guard to get back to his feet.”