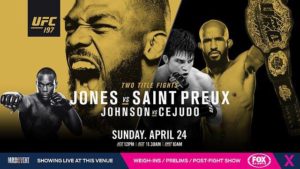 Head in and watch all the action live on the BIG screen in the Sports Bar.

“Due to an injury to Champion Daniel Cormier the UFC have announced a new headline fight for UFC 197. Top-rated contender Ovince Saint Preux will have his chance at glory when he takes on Jon Jones for the interim Light Heavyweight Title. The winner of this fight will then unify the division against Cormier later in the year.

The undercard is also stacked with Flyweight Champion Demetrious “Mighty Mouse” Johnson taking on Olympic Gold Medalist Henry Cejudo, while Aussie Rob Whittaker will be looking at extending his winning streak when he takes on tough Brazilian Rafael Natal. A win for Whittaker will catapult him into the top tier of middleweights and set up a big fight later in the year!”

The Management and Staff of WestWaters Hotel & Entertainment Complex promote the responsible service of alcohol & gaming. Any form of advertising and promotions contained (but not limited to) on our website, social media, fliers, EDM’s and print media are not implicitly or explicitly directed at minors, excluded persons or vulnerable or disadvantaged groups.

We never spam and you can opt-out at any time with one click
Pacquiao vs. Bradley 3
2 for 1 Kids Meal in the Bistro