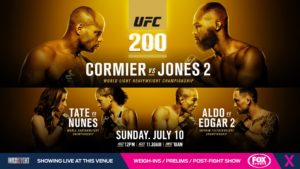 Head into our award winning Sports Bar to watch it live on 2 BIG screens!

“DANA White has made clear that UFC 200 will roll on without Conor McGregor after announcing Jon Jones v Daniel Cormier II as the new main event for the Las Vegas card – though the Irish megastar took a shot at the UFC over a fortune in potential lost revenue.

White rebuffed questions about revenue loss and even reduced ticket prices from not having McGregor on the card, having sensationally axed the Irish megastar from his rematch against Nate Diaz over failing to front for promotional work.

ESPN’s Darren Rovell reported that UFC 200 might lose $45 million in revenue from McGregor not being on the card but didn’t get a straight answer when he asked White about potential losses today at the card’s New York press conference.

“Listen, Conor’s going to fight again,” said White, who revealed that he hasn’t spoken to McGregor since last week and again intimated that he would not get a fight on the UFC’s blockbuster debut in New York at UFC 205.