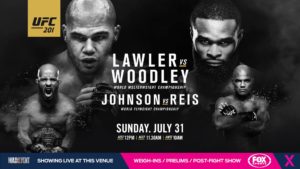 The event is expected to be headlined by a UFC Welterweight Championship bout between current champion Robbie Lawler and top contender Tyron Woodley.

A UFC Flyweight Championship bout between current champion Demetrious Johnson and challenger Wilson Reis is expected to serve as the co-main event.

Cláudio Silva was expected to face Siyar Bahadurzada at the event. However on June 16, Silva pulled out due to injury and was replaced by Jorge Masvidal.”