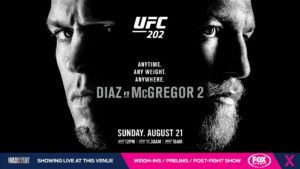 Head in and watch it live in the Sports Bar on 2 BIG screens!

“The event is expected to be headlined by a welterweight rematch between The Ultimate Fighter 5 winner and former lightweight title challenger Nate Diaz and UFC Featherweight Champion Conor McGregor.

The pairing previously met earlier in the year at UFC 196. McGregor was expected to challenge UFC Lightweight Champion Rafael dos Anjos, but dos Anjos pulled out due to a broken foot only 11 days before the event. Diaz eventually replaced him and the bout was shifted to the welterweight division. Diaz won the fight via rear-naked choke in the second round. Their rematch was originally expected to take place at UFC 200, but everything changed during mid-April, as a disagreement between McGregor and the UFC – regarding his media schedule – led to his removal from the event and then Nate Diaz was also pulled out.

A bout between former UFC Light Heavyweight Championship challengers Anthony Johnson and Glover Teixeira was expected to serve as the co-main event for UFC on Fox: Holm vs. Shevchenko. However, Johnson pulled out one month before the event to tend to personal issues. In turn, promotion officials elected to pull Teixeira from the card and the pairing was left intact and rescheduled to take place at this event.

Dong Hyun Kim was expected to face Neil Magny at the event. However, Kim pulled out due to injury on July 12 and was replaced by Lorenz Larkin.

A lightweight bout between Al Iaquinta and former welterweight title challenger Thiago Alves previously linked to this event is now expected to be contested later this year at UFC 205.