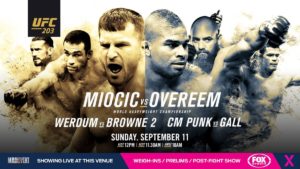 Head in and watch it live in the Sports Bar on 2 BIG screens!

“This will be the first UFC event in Cleveland.

The professional debut of former professional wrestler and two-time WWE Champion CM Punk is scheduled to take place at this event. Punk, who signed with the UFC in December 2014, had a delayed debut due to past injuries from professional wrestling that needed treatment and also due to Punk’s need for training time. He will make his debut against Mickey Gall in a welterweight bout.

Ben Rothwell was expected to face former heavyweight champion Fabrício Werdum at this event. However, on August 11, Rothwell pulled out due to injury. A team representative said he may have suffered a torn meniscus and could have an ACL injury. He was replaced by Travis Browne. This will be a rematch as Werdum defeated Browne via unanimous decision at UFC on Fox: Werdum vs. Browne in 2014.

A lightweight bout between Erik Koch and Drew Dober was originally booked for UFC 195, but Koch pulled out due to an injury and the bout was scrapped. The fight was later rescheduled for this event, until Koch pulled out again due to injury and was replaced by promotional newcomer Jason Gonzalez.”