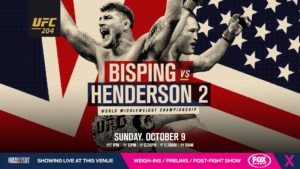 Head into the 2012 AHA Sports Bar of the year to watch it live on 2 BIG screens.

“This will be the fourth UFC event contested in Manchester and first PPV event held in the European/Middle East market since UFC 112.

In order for the event to be broadcast live during Prime time hours on the east coast of North America, the main card is expected to begin at 3:00 am (October 9) local time in Manchester (GMT), with a full preliminary card beginning at approximately 11:00 pm (October 8) local time. Despite the very late starting time, ticket demand was exceptionally high, as all tickets for the venue sold out in a matter of minutes.

The event is expected to be headlined by a UFC Middleweight Championship fight between current champion Michael Bisping and the former Pride Welterweight, Pride Middleweight and former Strikeforce Light Heavyweight Champion Dan Henderson. The pairing met previously in July 2009 at UFC 100 with Henderson taking the victory via second round highlight reel knockout.

A bantamweight bout between Brad Pickett and Iuri Alcântara was previously linked to UFC Fight Night: Arlovski vs. Barnett. However, it is now expected to be contested at this event.

Ruslan Magomedov was expected to face Stefan Struve at this event, but pulled out on September 9 due to a staph infection. Struve will now face Daniel Omielańczuk”

The Management and Staff of WestWaters Hotel & Entertainment Complex promote the responsible service of alcohol & gaming. Any form of advertising and promotions contained (but not limited to) on our website, social media, fliers, EDM’s and print media are not implicitly or explicitly directed at minors, excluded persons or vulnerable or disadvantaged groups.