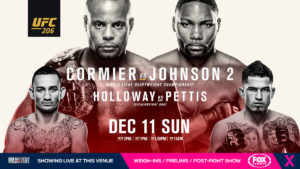 Head into the Sports Bar to watch it live on 2 BIG screens!

‘A UFC Light Heavyweight Championship rematch between the current champion Daniel Cormier and Anthony Johnson is expected to headline the event. The pairing met previously in May 2015 at UFC 187 with Cormier winning the fight (and the vacant title) via submission in the third round.

Promotional newcomer Poliana Botelho was expected to face former UFC Women’s Strawweight Championship challenger Valérie Létourneau at the event. However, Botelho was removed from the fight for undisclosed reasons on October 26 and was replaced by fellow newcomer Viviane Pereira.

Former UFC Flyweight Championship challenger John Moraga was expected to face former Bellator Bantamweight Champion Zach Makovsky at the event. However, Moraga pulled out of the fight in early November citing injury and was replaced by Dustin Ortiz.

A middleweight bout between Tim Kennedy and former UFC Light Heavyweight Champion and divisional newcomer Rashad Evans was originally booked for UFC 205. However, Evans was pulled from the fight days before the event after an undisclosed irregularity was found during his pre-fight medical exam. Subsequently, Kennedy was removed from the card as well. The fight was later rescheduled for this event. Subsequently, Evans once again was unable to obtain medical clearance to compete on the card and was pulled from the bout on November 21. An irregularity in his pre-fight MRI was responsible for both removals and he is expected to undergo an additional screening with a neurologist to prove he is healthy enough to fight, before possibly returning to the cage in January or February, according to his manager. Kennedy said he is still cutting weight in anticipation of a replacement opponent.

A welterweight bout between Chad Laprise and Li Jingliang was expected to take place at the event. However, Laprise pulled out of the fight on November 16 citing an undisclosed injury. As a result, Li was pulled from the card entirely and will be rescheduled at a future event.’