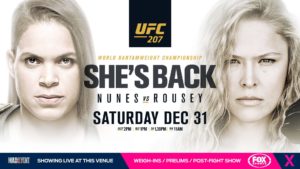 Head in and watch the last UFC for the year live on 2 BIG screens!

“The event is expected to be headlined by a UFC Women’s Bantamweight Championship bout between current champion Amanda Nunes and former champion Ronda Rousey.[2]

A UFC Bantamweight Championship bout between current champion Dominick Cruz and Cody Garbrandt is currently scheduled to co-headline the event.[3]

A potential heavyweight title eliminator bout between former UFC Heavyweight Champions Fabrício Werdum and Cain Velasquez is expected to take place on the card.[4] The pairing met previously in June 2015 at UFC 188, with then interim champion Werdum unifying the title, as he won the fight via submission in the third round.[5]

Matt Brown was expected to face former Strikeforce Welterweight Champion Tarec Saffiedine at the event.[7] However, Brown was pulled from the fight on November 11 in favor of a matchup with former UFC Lightweight Championship challenger Donald Cerrone three weeks earlier at UFC 206.[8] Saffiedine will now face Dong Hyun Kim.[9]

Maryna Moroz was very briefly linked to a fight with Jéssica Andrade at the event.[10] However, Moroz was replaced on December 7 by Invicta FC Strawweight Champion Angela Hill.[11]

Sabah Homasi was linked to a fight with Brandon Thatch at the event.[12] However, Homasi was replaced by promotional newcomer Niko Price.”