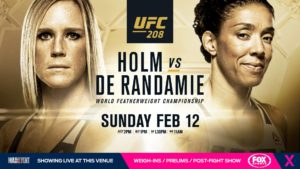 Head into the Sports Bar to watch it live on 2 BIG screens!

“AMANDA Nunes is only one title defence into her reign as the UFC women’s bantamweight champion of the world, but she’s already looking to add a second championship to her resume.

Nunes is coming off a blistering 48-second knockout over former champion Ronda Rousey at UFC 207 and now she has her sights set on the fight she wants next.

Nunes makes it clear that she’s gunning for the winner no matter who walks away with the title when UFC 208 is finished.