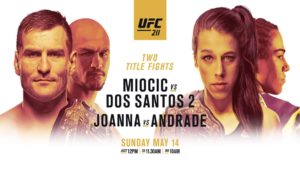 This will be the UFC event of the year with 2 BIG fights screened live on 2 BIG screens in the 2012 AHA Sports Bar of the year.

“UFC 211 is quickly becoming the biggest fight card of the year as the promotion has stacked the event with some of the best match-ups possible for its return to Dallas.

After the UFC 208 and UFC 209 pay-per-views were heavily criticised by fans, with president Dana White openly admitting 208 was a poor show, the UFC has loaded up on 211. Since 209 last weekend, Eddie Alvarez vs Dustin Poirier, Henry Cejudo vs Sergio Pettis and Frankie Edgar vs Yair Rodriguez have all been added to the card, while David Branch vs Krzysztof Jotko has been confirmed but not officially announced.”