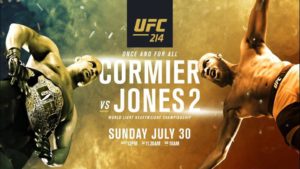 Head into the Sports Bar and watch all the action live on 2 BIG screens!
Don’t forget to ask the staff what the drink special and meal deal of the day is.

A PPV event was initially planned for Anaheim on January 21, 2017, but was rescheduled for this date after a lack of suitable headlining fights could be arranged for the initial date in January.

A UFC Light Heavyweight Championship bout between current champion Daniel Cormier and former champion Jon Jones has been targeted for this event. The pairing met previously at UFC 182 in January 2015 with Jones defending his title via unanimous decision. Subsequent to that victory, Jones was stripped of the title and suspended indefinitely from the UFC in connection with a hit-and-run incident that he was involved in. Cormier replaced him and went on to defeat Anthony Johnson at UFC 187 to win the vacant title. Their rematch was originally expected to take place at UFC 197, but Cormier pulled out three weeks before the event due to injury and was replaced by Ovince Saint Preux, in what became an interim title bout. Jones went on to defeat Saint Preux by unanimous decision and won the interim title. The fight was scheduled again and was expected to headline UFC 200 in July of 2016. However, Jones was pulled out of the fight by USADA due to a potential Anti-Doping Policy violation stemming from an out-of-competition sample collection on June 16. Jones’ “B” sample also came positive for the same substances and Jones was suspended for one year, retroactively to July 6, 2016. The Cormier-Jones rematch was officially announced on May 12, though its status as main event or co-headliner was not initially confirmed. UFC president Dana White confirmed that the bout would headline this event, despite previous issues regarding Jones. He also announced that Jimi Manuwa will participate on this card and should anything happen to the main event, Manuwa would be the replacement. On May 31, Volkan Oezdemir was announced as his opponent.

A featherweight bout between former UFC Featherweight Championship challengers Ricardo Lamas and Chan Sung Jung was originally in the works for UFC on Fox: Weidman vs. Gastelum. However on May 12, the bout was confirmed for this event. The pairing was originally slated to take place in July 2013 at UFC 162, but Jung was pulled from the bout in favor of a title fight against then-champion José Aldo at UFC 163. Subsequently, Jung pulled out of the fight in early June due to a severe knee injury. He was replaced by Jason Knight.
Doo Ho Choi was expected to face Andre Fili at the event, but pulled out on June 14 due to injury. Artem Lobov revealed that he was offered the fight, but declined in order to help current UFC Lightweight Champion and former UFC Featherweight Champion Conor McGregor prepare for his boxing match against Floyd Mayweather Jr. On July 15, promotional newcomer Calvin Kattar was announced as his replacement.
Claudio Puelles was expected to face Sage Northcutt, but pulled out on June 19 due to a knee injury. He was replaced by John Makdessi. In turn, the fight was canceled on July 14 due to both fighters being injured.
A welterweight bout between former UFC Welterweight Champion Robbie Lawler and former UFC Lightweight Championship challenger Donald Cerrone was originally booked for UFC 205. However, Lawler pulled out to take a little more time after recovering from his previous fight at UFC 201. The fight was then rescheduled to take place on July 8, 2017 at UFC 213. Reports began to circulate on June 28 that Cerrone had sustained a minor injury and that the pairing would be left intact, but shifted to this event. UFC President Dana White confirmed later that Cerrone in fact had a staph infection and a pulled groin, and while the plan was to keep the bout, it wouldn’t happen at this event. In the end, the bout was confirmed on July 2 for UFC 214.
On June 28, the California State Athletic Commission (CSAC) denied former UFC Bantamweight Champion Renan Barão a bout at that weight class against Aljamain Sterling, due to his previous weight issues at UFC 177, in Sacramento, California. The bout will still happen, but at a catchweight of 140 pounds. CSAC Executive Director Andy Foster said that if Barão makes weight with no issues, the CSAC will revisit the possibility of allowing him at 135 lbs in the future.
Sara McMann and Ketlen Vieira were expected to face each other at the event, but on July 7 it was announced that the bout was moved to UFC 215 in September.