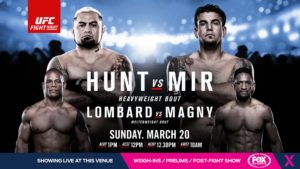 Head in and watch it live on the BIG screen in the Sports Bar.

“The event will be the second that the promotion will host in Brisbane, the first being UFC Fight Night: Hunt vs. Bigfoot in December of 2013.

A women’s strawweight bout between Bec Rawlings and Seohee Ham was originally booked for UFC Fight Night: Miocic vs. Hunt. However, the bout was cancelled due to Ham being injured. The fight was later rescheduled for this event.”

We never spam and you can opt-out at any time with one click
Mother’s Day Sunday 8th May
Pacquiao vs. Bradley 3