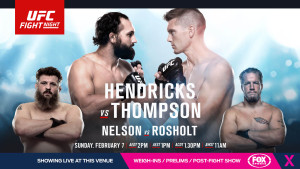 Due to injuries, the scheduled Dos Anjos Vs McGregor will no longer be aired. It will now be UFC Fight Night: Hendricks vs Thompson.


Head into the 2012 AHA Sports Bar of the year to watch it live on 2 BIG screens!

The event was originally billed as UFC 196 and was scheduled to be headlined by a UFC Heavyweight Championship rematch between current champion Fabrício Werdum and former two-time champion Cain Velasquez. A series of events eventually led to a main event shuffle: on January 24, 13 days before the event, Velasquez pulled out of the bout due to a back injury and was replaced by Stipe Miocic. On the following day, Werdum announced that he was pulling out of the event due to injury as well as he wasn’t comfortable with the opponent change while dealing with injuries of his own.

With no viable main event options remaining, on January 26 UFC President Dana White announced the company was canceling the pay-per-view broadcast. Therefore, UFC 196 became a Fight Night card. The event will now air on Fox Sports 1 and will be headlined by a five-round welterweight bout between former UFC Welterweight Champion Johny Hendricks and five-time kickboxing world champion Stephen Thompson. The two were originally scheduled to meet in the co-main event.