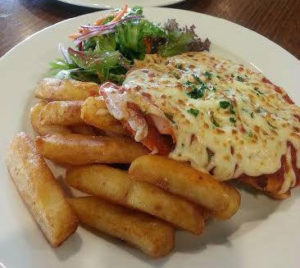 The history of the parma is a hotly debated topic!

There’s no doubt that the dish is traditionally from Italy, where it was developed as eggplant parmagiana.

However, there is no definite answer as to where in Italy it came from. Different regions claim or have been rumoured to have been the source. One of these locations is Parma in northern Italy.

Parma is best known for its parmigiano cheese, a traditional ingredient in the eggplant parma. They are also known for producing parma ham, although the addition of ham to the chicken parmigiana we know and love seems to be a modern, and possibly Australian, practice.

Veal was also a commonly used meat in Italy, which may be the source of the veal parma.

America has tried to claim the chicken parma (although they call it chicken parmesan). They say that Italian immigrants brought the dish over, and then chicken versions were developed.

The type of cheese used is also debated. It seems that hard cheeses, such as parmesan, were traditionally used, but now days mozzarella is often substituted.

No matter what the history, Australia has taken the parma and made it its own.

Serving it with chips is a distinctly Australia practice. In fact, Australians love their parmas so much that they’ve gotten creative with toppings, trying out all different styles! The classic ham, cheese and Napoli sauce remains the favourite, however.

Another uniquely Australian thing is having a beer with your parma. Try WestWaters’ parma and pot special on Tuesday nights..